a new paradigm for the 21st century

We live on a beautiful planet which gives us more than enough resources for everybody to live in comfort. We would all live in paradise if we could just love each-other more and stop being rotten to each-other.

Please download the free PDF version of this book and send to everyone you know.

If you are in business you may give it to your customers, include it in a bundle you are selling or offer it as a free inducement. The important thing is to get this message out to the world. The only condition is that you do not change this book in any way.

The Media, Police, Politicians and Corporations are lying to you. In this book London ex -gangster turned charity boss, Bobby Cummines OBE, former News of the World journalist Ian Cutler and Towards Utopia Movement founder, Jack Cox explain about this POST-TRUTH era and how you are being systemically lied to.

We even suggest a new, much fairer tax system. We look at the causes of the problems in the Middle East, how the Arabs were conned during WW1 and how their lands were carved up by the Treaty of Versailles. We follow the money and uncover the selfish motives of the people concerned. The common theme throughout this book is the role played by the corrupt media barons such as Rupert Murdoch, the central banks owned by the Rothschild family and the arms trade.

But its not all doom and gloom. We end with a look at beliefs and responsibility and how by being aware, we can choose what information to allow into our minds and as a result, we can create a better future for ourselves. 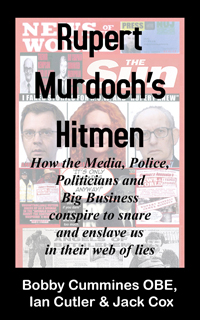